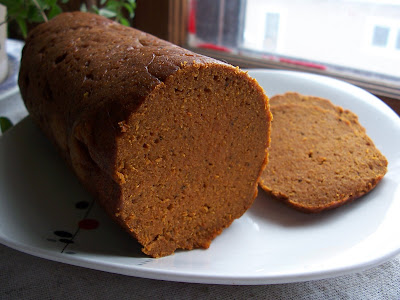 Mother of god--when I actually have a rare burst of spare time on a weekend with absolutely nothing I'm obligated to be doing, man, do I cook. (And watch way too many movies--but movies are good, what can I say.) This weekend it was ribz, sweet potato fries, orange chocolate-chip cookies, peanut butter brownies, baked seitan, pizza, and Steph's sockarooni pasta. Utter madness.

Well, I guess I'll head off the week with the Seitan Recipe o' Greatness which has spread through the vegan internet community like chickenpox. Or like leprosy. Or like the blustery snow this weekend over the streets of Cleveland.

I've been itching to try baking this seitan since I first saw it, primarily because it was WAY too easy-sounding to make. I've made the VwaV recipe before, but it requires too much effort for someone as lazy as me. Mixing stuff and throwing it into the oven: that's my cup of tea.

And this recipe is the cutest (if a recipe can actually be cute). 90 minutes after tossing this log o' goodness in the oven, it came out all red and pretty and looking like an animal-friendly Pepperidge Farm salty log o' saltiness. It was so cute that I just wanted to keep squeezing its cheeks and mumbling "Oh isn't the little loggy the cutest EVER! So cute, little loggy loggy. A-boo-boo-boo. Is da loggy cute? Yes it is! Loggy loggy."

And it was tasty to boot. Like I've mentioned before, I'm always skeptical when people act like a recipe is the second coming. But man, this was good stuff. I enjoyed nibbling on it all by itself. And it also tasted delightful tossed on a sammich.

My hopes for the future: to try out some variations on the cute little loggy log. But until then, I definitely recommend the recipe, as it is a good (and ridiculously easy) one.

Oh yeah, and months after having baked my vegan ribz, thinking that there was a different between vital wheat gluten and vital wheat gluten flour, I finally realized that the two things are THE SAME DAMN THING. Yeah. I'm a dolt sometimes.

Add the liquid ingredients to the dry ingredients. Mix well, then knead for several minutes.

Form into a log (6-8" long), wrap tightly in foil, twisting ends. Bake for 90 minutes. When done baking, unwrap and leave out to cool all the way. Then wrap it foil or plastic and refrigerate. Slice to use as desired.

[Oh, and belated side-note: For those of you who are vegan or have been privvy to another vegan's gas, you already know that vegans have 100x more filthy disembowelingly nasty farts than the rest of the human race. {{It's the veggies!}} Anyways, this seitan will a) triple the frequency of your gassiness for the day and b) somehow manage to quadruple the raw-egg stench of it to the point that you might actually be able to blind someone with your farts and/or take over the White House with them. I swear, yesterday after eating some of this for lunch, my cats every once in a while would look at me with a "Are you fucking kidding me? Did we do something wrong and you're trying to punish us??" look. So be forewarned.]
Share