The Brownies of Death and the Cookies of Life 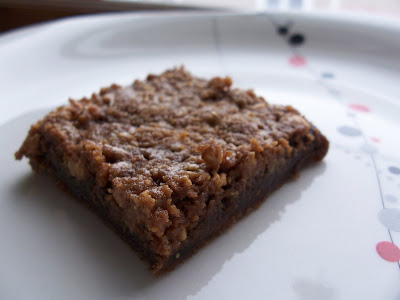 THE BROWNIES OF DEATH
Apparently I horrified some of you (as well as myself) last week when posting E's garlic bread recipe which appeared to use a whole cup of vegan butter. Needless to say, he didn't actually *use* all the butter on the garlic loaf. (Thanks be to Jesus.)

Anyways, I was even *MORE* horrified this weekend when I tried out a peanut-butter brownie recipe from the Vegan Planet cookbook, *AND IT WAS EVEN GREASIER THAN THE GARLIC BREAD WE HAD*. I'm sorry to say, brownies shouldn't even come CLOSE to being comparable to garlic bread grease-factor-wise. And yet, these brownies totally totally were.

In fact, right now, these brownies are sitting on the corner of my desk at work, shamefully hiding themselves from being seen because they *REALIZE* they are ridiculously greasy and are embarassed about it.

I can. And it's precisely what I said to myself when, after the brownies had cooled all the way, I sliced them up and began to remove them from my (kick-ass silicon) brownie-pan. The bottom of the pan was shiny like the face of a greasy and pimplified teenager. I held up a brownie to inspect it, and the bottom was about three times darker than the top due to the oil. I promptly placed all the brownies on napkins to absorb some of the oil, but that helped only minimally. When I scrounged up enough nerve to try one again this morning, to see if I might actually be able to offer them to folks, it was like sucking on a large pad of chocolatey-looking butter. I ate the whole brownie (because I am an idiot like that), but that was that. Now I'm just prolonging the inevitable trip to the trashcan.

What went wrong? I've not a clue. I used the precise amounts the recipe called for. And yet, it was a grease-fest like no other grease-fest I've ever seen.

I think I'm swearing off brownies for a while because of it.

Point being: unless someone out there has *had* good results with these brownies and wants to help me figure out what I did wrong, I suggest the rest of you stear clear. Your arteries will thank you. 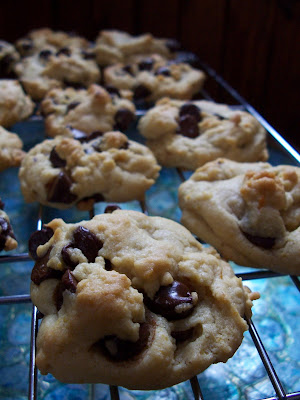 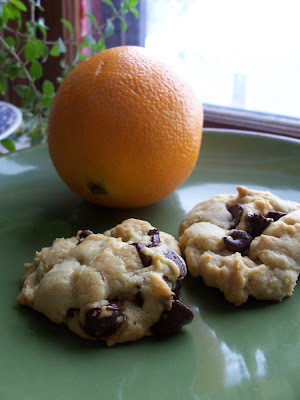 Sadly, I was attempting these brownies for a friend's birthday, but once I saw the slimy sheen glistening across the bottoms of them, I couldn't rightfully give them to her. Especially since she's getting ancient (she turned 30) and I didn't want to encourage a heart attack. (BURNNNN!) But thankfully, I accidentally found wedged in a textbook of mine, an assortment of dessert recipes that E had photocopied for me. Realizing that I was quickly running short on a) soy milk, b) vanilla extract, c) vegan butter, and d) canola oil, I thanked my lucky stars that this recipe called for PRECISELY the amount of a), b) and c) that I had on hand.

And damn if these aren't good cookies. I added a couple tablespoons of orange zest to them as well because I was in the mood to orangify, and I highly recommend them that way. The only thing the recipe failed to mention (and which is necessary) is that you need to let the cookies harden on the baking sheet for at least 3 minutes or so before you transfer them to a rack. Otherwise, when you go to pick them up, they're just gonna turn to mush in your fingers. I also recommend using a temperature of 375 and baking for 10 minutes. 10 minutes at 350 was turning up barely-browned cookies, but (as always) it could just be my stove. So just keep your eye on them.

In a large bowl, mix the margarine, sugar, and brown sugar until it's light and fluffy. Slowly stir in the soy milk then add the vanilla to make a creamy mixture.

In a separate bowl, combine the flour, salt, and baking soda. Add this dry mixture to the creamy mixture and stir well. Then fold in the chocolate chips.

Drop small spoonfuls onto non-stick cookie sheets and bake for 8-10 minutes (or until tops are lightly golden).

Remove from oven and let the cookies sit on the baking sheet for at least 3 minutes until firm. Place on cooling rack to cool completely.